Welcome to our new website. Please have a look around, any feedback is much appreciated.

U. Montreal has been granted 1.3 M$ from the CFI to install a new beamline that will allow in plasma ion beam analysis and testing materials exposed to low earth orbit conditions


The CCPAC has two 1.7MV Tandetron accelerators, one at Université de Montréal and one at University of Western Ontario. The tandem mode means that the ions are accelerated twice by the terminal voltage. 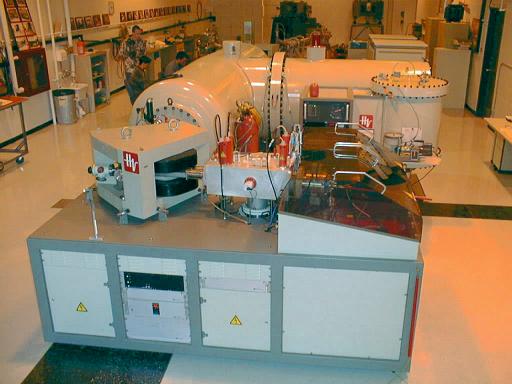 Negative ions are generated by the source, then injected into the terminal (beige tank on the picture). They are then first accelerated by the positive potential of the terminal. When they pass through the center of the accelerator, a stripper gas makes them lose electrons. They thus become positive ions, are pushed back by the positive potential and will accelerate another time, their energy being able to reach several MeV. They are then directed towards the chosen beam line. 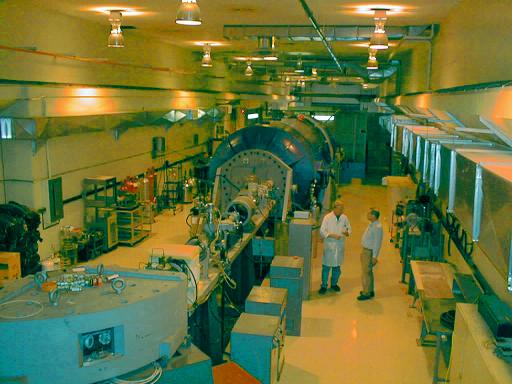 The Tandem accelerator at UdeM works according to the same principle as the Tandetron, but with a much higher terminal voltage (6 MV), which makes several tens of MeV ion beams possible. The currents are lower, however (few µA). This accelerator is actually the first prototype of a Tandem accelerator in the world. Installed initially at Chalk River Laboratories in 1954, it was transferred to U. Montreal in 1966. A new source and a new charge system were installed in 2002.

There are two beamlines on the 4MV HVEE tandem at the RMTL (Reactor Materials Testing Laboratory) at Queen's University in Kingston. This lab is focused on improving our understanding of the effects of irradiation on the thermomechanical properties of materials, with particular applications for the nuclear power industry or for space. The focus of the research is on in situ testing (e.g., heating, straining, corrosion) during the irradiation process. Target areas can be under vacuum or in helium (for samples where heat removal is a particular issue). As well as the accelerator, the RMTL includes characterisation equipment (e.g. TEM, SEM, nanoindentation, gamma spectrometry). beamlines on the 4MV HVEE tandem are capable of delivering H+ at 2-8MeV up to 45µA and He++ at 3-12MeV up to 6µA.

The facility at the University of Guelph is based on a 3 MV Pelletron accelerator, which replaced the old KN Van de Graaff at Guelph in 2002. It is a single-ended machine which serves three beamlines, each of which provides proton-induced X-ray emission (PIXE) for elemental analysis. This method resembles the electron microprobe but offers considerably superior limits of detection. One beamline supports conventional broad-beam PIXE, while the other two support Canada’s only two nuclear microprobes. The newer one of these, supplied by Oxford Microbeams, and installed in 2010, can focus beam currents of a few nA down to a 2-3 micron spot, thereby enabling 2-dimensional elemental mapping of samples.